The Ever Changing Bicycle

There is a certain magic in unexpected things. You are driving along, normal “block everything around you out” sort of drive, and you see the most amazing thing ever. It brings a huge smile to your face, you start to ponder all sorts of questions about the hows, whens, whys and whos. And then you move on with life and the magic kind of fades. Fate has a funny way of keeping the magic alive, even if it takes multiple times!

I met this kind lady named Linda Cushman in the school parking lot one day. We both had our windows down, waiting on our daughters to be dismissed from the middle school. Linda looked over at me and struck up a conversation, it was pleasant, funny, warm and educational, it stuck with me for several months leaving a good mark. After my Bell’s Palsy episode, I decided to embark on a new journey with yoga, (you’ll get to hear all about that someday), and who should be attending the class too? LINDA! We struck up a conversation about the usual stuff: work, family, homes, and when Linda was describing where she lived, I asked if she lived near that bike that always changes. She smiled a luminous smile and in her quiet way said, “That is my bike, that is where I live”. It really was like meeting a creative, celebrity genius all rolled in to one.

I asked Linda if I could shoot her bike, because, well, because it is AMAZING. What that actually means is that Linda and her husband Derek Cushman(along with their daughter, Ella) are AMAZING. What started off as a one time thing for Christmas in 2017, morphed in to an inaugural year of ever-changing bicycle! People were so excited and impressed with the 2017 Christmas bike, that Linda and her family decided to keep going, rolling along with the seasons and holidays. Remember when I told you that there were so many things I pondered about this magical bike? I asked Linda the back story, what inspired her, what she hoped to accomplish with the bike, if she has any big plans in the future with the bike, if she would leave it if she sold her house, would she take it with her, does she dream and design far in advance or how does the design come to her, what was her favorite bike, how often does she change it…HOW DOES IT ALL WORK BASICALLY?!? Thankfully Linda indulged all that I had pondered and then some, these are her responses:

-There is only 1 bike

-My inspiration was a flower shop in Burbank, California. The lady that owned the shop had a bike in her display window that she would change up with the seasons.

-I found the bike at a garage sale, I don’t usually go to garage sales, but the bike caught my eye as I drove by, and for some reason, I stopped and bought it.(FOR $10!!)

-We like to bring a smile to people’s faces, and to give young and old something fun to look forward to!

-The bike changes every 4-6 weeks, and has been different every time. We don’t spend a lot of time planning the bike, it just kind of happens! The bike receives fresh paint and different decor items each change.

-The bike has become our thing as a family, so more than likely the bike will go wherever we go(if they move-my pondering). The bike has taken on a life of its own! People slow down to take pictures of the bike as they are driving by, stop in the driveway to get out to take the bike’s photo, and also pose with the bike, either themselves or their kids. 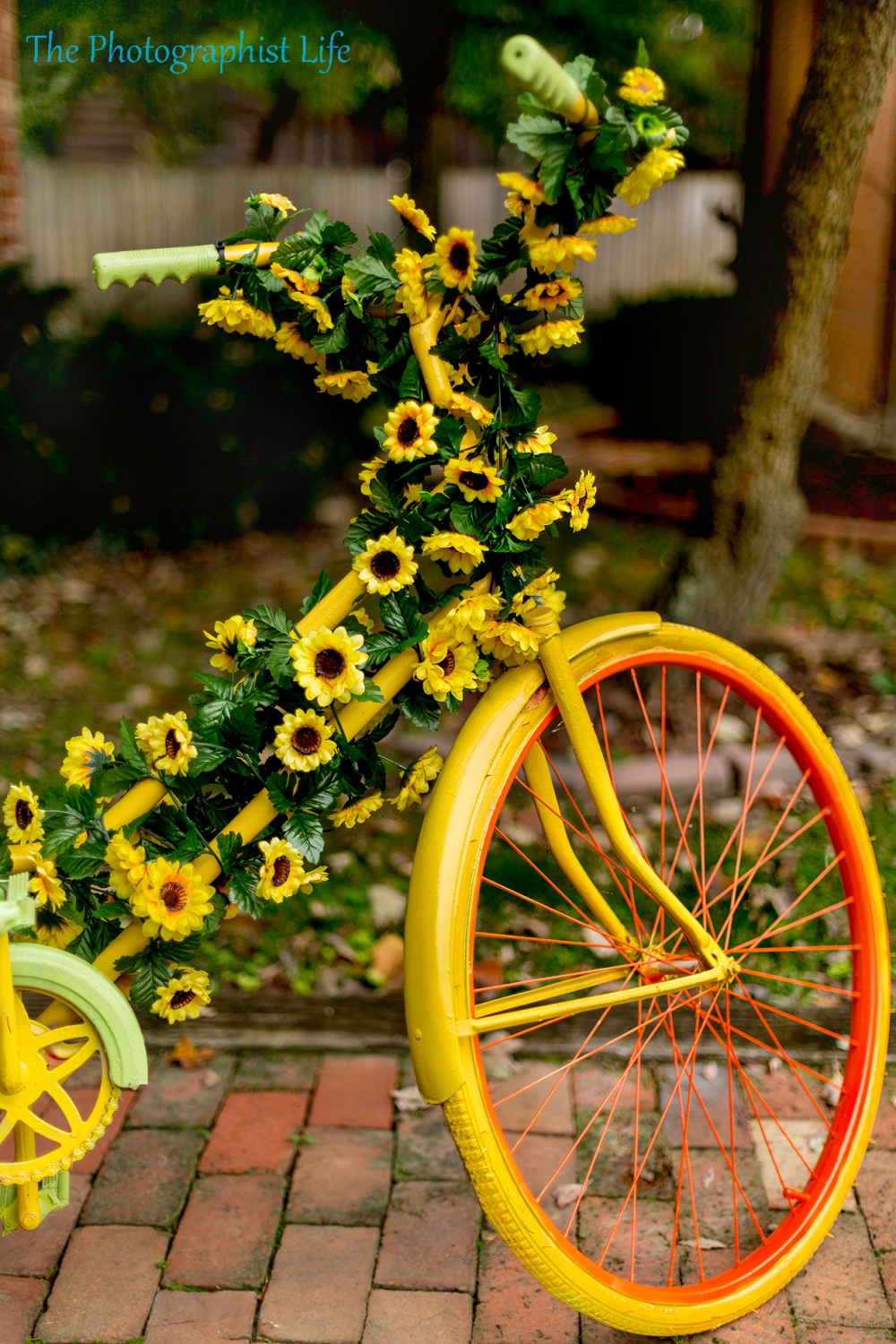 When asked what theme was her favorite, Linda said:

-I would have to say the 4th of July 2018 was my favorite. It was so much to do, I just imagined it being in a parade. So many people were upset when we took it down, as it was only up 2 weeks, I wish I had taken a picture of it.

No worries Linda, I’ve got you covered! I missed Linda’s Fall bike(someone fire my scheduling department), but you can rest assured that I will be capturing and featuring all the rest right here on TPL as they cycle through. If you would like to see Linda, and her family’s magical bicycle,(and you live in Chillicothe, Ohio), just drive to the corner of Allen and Worthington, you will be in for a treat!! Thank you Cushman Family for your time, and warm hospitality!

There is magic in us all, make sure you see it in others!

4 Comments on “The Ever Changing Bicycle”